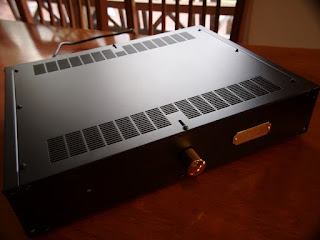 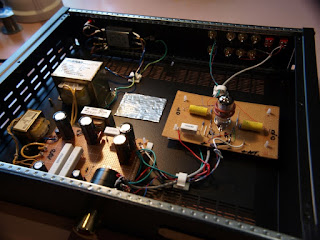 The original Lagoon had a few noise issues and was not suitable for the intended user. When I got it back I wanted to take it back to a 4S single stage tube preamp. The second in the 4S series, the MKII or in my build "The Black", was the one I wanted to build. This series eventually lead to the 4SU (Universal) tube preamp. The MKII was a better tuned version of the rough original and more suited to the 12AU7, a tube I preferred in preamps. Not only that I had some Psvane "T" series MKII tubes which I have enjoyed in the past.

I had all parts on hand and was determined to only use parts on hand for the amp brd.  Metal film resistors and silver solder plus some MP caps. The rest of the preamp was complete so I only need to make the preamp section. The MP caps are metalized paper in oil.

On some early listening the preamp sounds good. Unfortunately Lagoon can only drive into high impedance power amps. OK for me because that is what I intend to use it for. For an image of the back of Lagoon refer to an earlier Lagoon post.


Posted by retro-thermionic at 8:17 PM