Oatley K272C headphone amp in a tin can 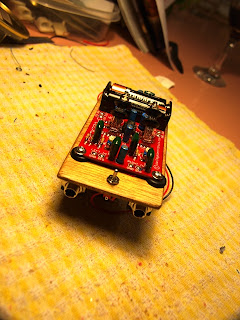 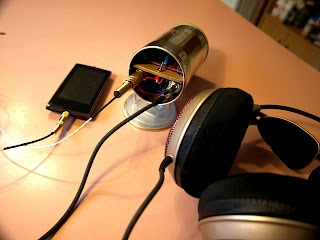 Oatley has released a new version of their popular K272 headphone amp\preamp the K272C. In this version there is separate filament batteries (2 X AA) two LEDs to indicate battery health and 18V working throughout. Further more the driver chip is now the high performance OPA2134.

I was given an assembled prototype for evaluation but had no case to mount it in. My wife gave my a very nice tin can with a pop off lid and suggested I build an amp in it. I mounted the cct. brd. on a varnish ply plinth and slid the whole assembly into the can. To use the preamp, pop the lid, plug in and turn on.

This is the warmest sounding preamp to date. At this point I have only had a short listen but will add to these notes once I have spent some time with the preamp. The kit should be available from Oatley by the end of April 2013. Cost has not been finalised but I would assume somewhere around $30 to $40.
Posted by retro-thermionic at 6:22 PM No comments: