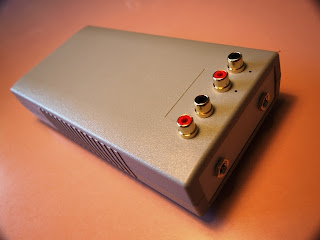 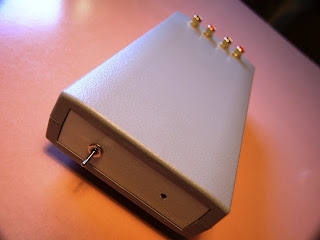 I had never built an electronic crossover (EXover) before but do understand how they work. This EXover would be simple as it was to just work with stereo sub-woofers and reject frequencies above 60Hz. The single cct. brd. contains the differential PS required to power the LM833 OPAMPs left over from other projects. Due to the fact that this EXover was as simple as an OPAMP preamp a single cct. brd. solution was easy.

The cct. brd. is vero-board or strip board and fitted into a standard enclosure I use for headphone amps. The input\output RCAs were mounted on the top of the enclosure and power socket on the rear. A small ex-power drill charger suppliers 18V @ 400mA for the EXover which only requires a very small amount of current.  As stated above this is converted to +\- 9V by the power supply on the cct. brd.

The design was meant to produce a rollover at 60Hz but under test the rollover occurs at 52Hz. The slope is only -12db\octave. This gentle roll-off allows lower mid frequencies into the sub-woofers drivers but also allows for easy integration into my 2-ways speakers. The EXover performs well with inexpensive parts and is dead quiet in operation.
Posted by retro-thermionic at 7:26 AM No comments: