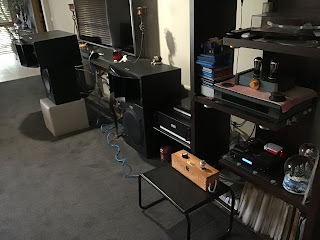 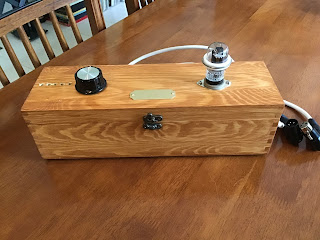 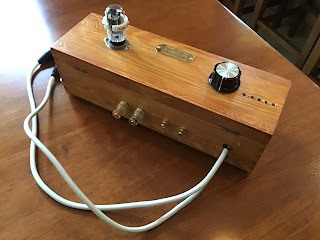 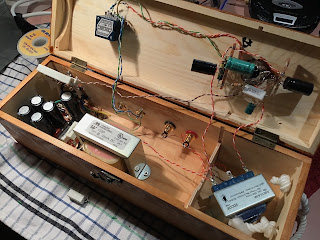 Building yet another mono triode Salt Cellar wine box amp I had to make it different. To make even simpler this time just one tube, the 6EM7, which has two triodes in the one bottle. I'm told its like having a 6SL7 and a 45 in the one tube. Once more an external (but different) tranni box was used. This one also works with my two wine box 6L6 SE UL amps.

Again all parts came from da lab. That part of the Salt Cellar initiative was flowed strictly. How simple with just one tube and an Alps stereo attenuator. The output of the attenuator is coupled with two resistors for a mono mix. Strictly using parts on-hand I use a SS double Pi rectifier brd. I had made many years ago. Add a big 10H 125mA choke and yet another stage of filtering you have a dead quiet "is it on" quietness.

A different finish here from using a staining varnish and again an old world look and feel. The knob goes on top otherwise it would have looked a little baron. All wiring is via solid core Cat 5, motsly as twisted pairs. Early days the amp sounds good but does it compare with the original SC 807 amp. Time will tell.

Posted by retro-thermionic at 6:21 PM No comments: 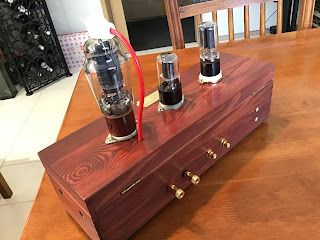 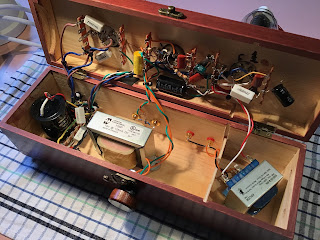 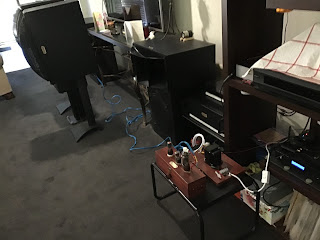 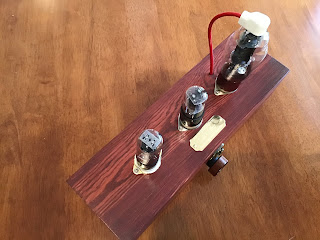 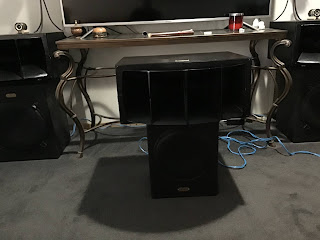 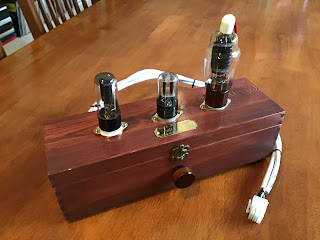 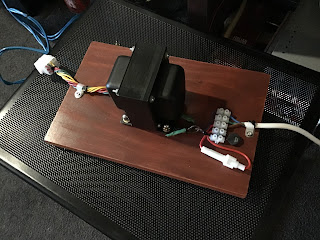 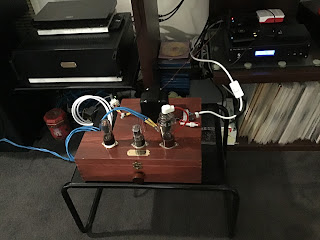 You should read the Salt Cellar article from Stereophile online to get a better understanding of why I took on this project. In the article a mono system was hobbled together using low power tube mono amps and high efficiency horns. The system was auditioned in an old salt mine which would add to the acoustic.

After building a few small tube preamp from parts on hand I decided to build a mono triode integrated amp from parts I had in da lab. Because the amp in the article had tube rectification and the power tube had a top cap plus the amp was held on a wooden frame I went with similar. I've built a few wine box amps and had a few spare boxes on hand. A stain I have used once before was re-used here but instead of multiple coats of hand panted lacquer I went with a spray lacquer. The finish was much more rustic and had the appearance of aged wood.

The power tube is an 807 a pair of which I was given many years ago. On hand was two old RCA 6SN7 tubes and two "80" small rec. tubes. I had to purchase a few high voltage filter caps and a big ass 720V power tranni. The power tranni sits outside on its own matching brd with a multi-pin connection. The tranni was mounted on thick rubber grommets to control vibration and light rubber feet are also fitted. For a bit of tranni bling chromed domed nuts bind down on brass washers. A shared tranni means any other tube amps I build can share the one expensive tranni. Bonus!

The volume pot sits between the preamp and driver tube not upfront as many do. This means Im not throwing away signal then amplifying what is left. The whole input signal is amplified in the preamp stage then attenuated into the driver stage. There is no input cap and a  0.68 poly connects the preamp to the driver stage and a 0.1uf PIO to the 807 power tube. The preamp section and 807 have no Ck but the driver tube does - a low ESR elctro which is also snubbed.

Beware if you view the original schematic on Diyaudioprojects site pins "2" and "3" are incorrectly labled so check it out yourself.  After solving many small issues including the pin swap and in my case bad pin counting the amp function perfectly with voltages and currents near textbook values.

In my Salt Cellar system you will see a mix of 12" Beyma and Altec 511B/FaitalPro horns. The Beyma provides bass and super tweeter and the horns mid/treble. I'm using the Beyma Xover which Xs at 1100hZ and is expecting 16 ohms on the treble side. Two horns in series gives me that value. Two runs of solid core Cat 5 with mates and pairs split provide the speaker wire.

I tried the speaker setup with two horns but later felt a single horn on the Beyma on the floor the more balanced configuration. The horn is tilted up slightly and padded down a few db. Still lots of mid but the bass is felt more. I watched a 4K movie with this configuration and really enjoyed it. Missed nothing and gained a lot more. Who needs stereo?

The sound is light on bass but heavy on detail, immediacy and transients are ridiculous. So much more revealed in tracks I know very well. Part of the SC system is to hobble one together from parts on hand. I achieved that about 90%. I have enough parts for a second amp.

Stereo is mixed down to mono in the amp with a "Y" network of three 47K resistors. The amps produces about 5W and plays plenty loud through the high efficiency speakers (98db). I haven't tried how loud yet as at about half vol. it is already deafening with no distortion.


Posted by retro-thermionic at 6:04 PM No comments: