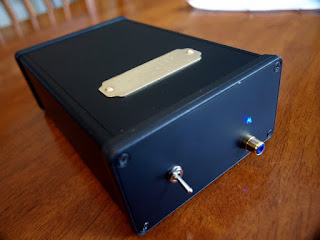 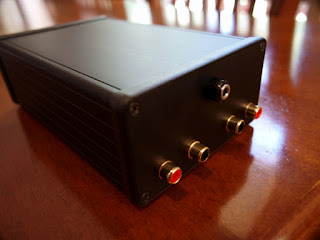 Here is a blast from the past - a Silicon Chip phono stage kit (2006). Nice part is you can switch between three different EQ stages. Comes with a PCB and all the parts required. It uses the LM833 OPAMP but it can be swapped out for a OPA2134. I really wanted to hear how the LM833 sounded compared to the OPA1234 so far I like it. The LM833 is all bipolar compared to the OPA2134 which has a jFet front end.

The original idea was to have variable gain but a $2 pot in the gain stage seemed a bad idea. It is a two stage preamp where Mimic is a single stage. The second stage is a buffer and high pass filter to cut frequencies below 20Hz (rumble filter). This left the overall sound too thin and lacking body. I changed the roll off point to 10Hz. This improved the performance of the phono stage dramatically.

Solid core hook-up wire was used in a Hammond Al enclosure and WBT silver based solder. Originally to be powered by an AC wall wart now running on batteries. Sound is bright and immediate where my DIY Mimic is more about tone this one is about detail. After extensive listening I think I prefer this preamp over Mimic but then it gets down to taste.

Posted by retro-thermionic at 8:26 PM No comments: