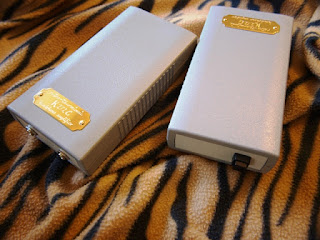 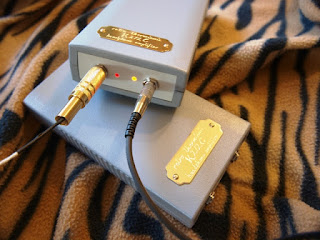 Oatley has continued to improve their headphone amp\preamp with the release of the K272C. I had something to do with this progression consulting directly with Oatley. In fact there was a K272B between the K272A and the “C”. Here are two K272C headphone amps, assembled from the new kits which sell for $40 from Oatley.

The improvements over the original K272 are:

The kits are very easy to assemble with the excellent PCBs being screen printed and solder masked with through hole plated. The sound has improved with better bass response.

In this build I Al lined the ABS compact enclosures and used switched 6.5 stereo phone jacks. Only with both source and headphone plugs inserted and the press button switched “on” at the rear will power flow. Wire-wrap wire has been used in the signal path and the battery health LEDs have been brought out to the front of the enclosure. The sound appears to have better bass than previous models but the tubes will ring if struck.
Posted by retro-thermionic at 5:01 AM 1 comment: 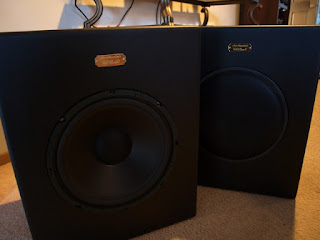 These 60ltr sub-woofers were built to complement my 2-way speakers "VoXDeuX". The drivers are 12" polycones with a free air resonance of 25hz. In the box they go down to 31hz where they are very active. The drivers are very efficient and are being powered by a compact 50W Class D amplifier. A stereo feed is taken from the preamp and passed through an electronic filter. The filter has a -3db point of 52hz and but employs only a -12db slope.

The internals of the box comprise of six vertical braces. Bitumanised heavy Al foil covers most surfaces. Pockets and chambers are formed at the rear by the bracing which carries additional dampening. These are then covered by a single layer of damping. This forms a number of air and dampening layers. With a gentle roll-off and the ability to control the volume of the sub-woofer's integration with VoXDeuX has been reasonably easy. The sub-woofers have been called "VoXItBassO" meaning voiced in the bass region.
Posted by retro-thermionic at 12:02 AM No comments: