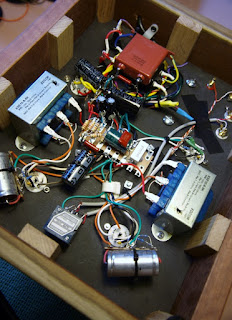 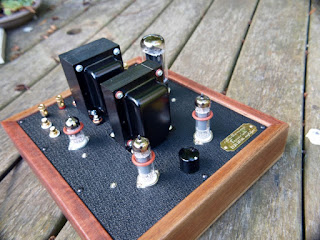 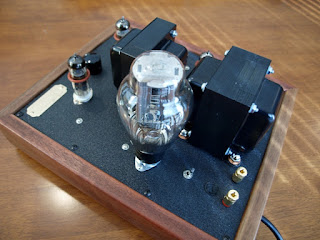 This is a Decware inspired EL84 power with attenuator. My twist was to make it an EL84 SE UL (not a triode amp}. Also I upgraded the PS. One PS tweak was to use a Russian PIO 4uf cap as the first cap. Larger electros than specified were used and a 10H choke as part of the dual section PS filtering. All larger electros were snubbed.

The inter-stage caps are Audio Note Tin foil paper and oil. This amp is called "Tamarisk". There are a number of small creeks which wind through this part of of southern Victoria and one is called Tamarisk. I just like how it sounds. The finished amp looks cool and not too heavy.The sound is a big step-up from my 6V6 SE UL. With live classical music the sound appears to unfold in layers. Decay and reverb also appear to occupy their own layer. The bottom images shows the Sophia Princes 274B as the new rectifier tube for the amp.
Posted by retro-thermionic at 5:57 PM No comments: