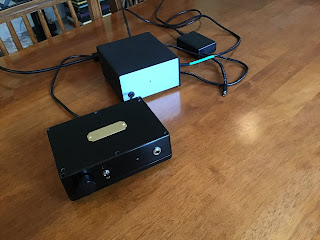 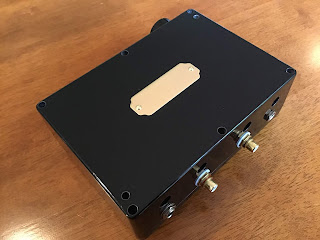 Oatley Electronics Australia had been selling headphone (HP) kits for some years. These were based around the JAN6418 subminiature pentode and PT2308 HP driver chip. I've built and sold quite a few. Branching out from the normal this all FET HP amp has a two jFET input stage then two small power FETs arranged in push-pull to drive the HPs. A unique design but after  a few prototype brds. were produced the amp was dropped.

I got two of the brds, an "A" and "B". The "B" had better layout and LEDs were added. From the brd. I made "Gothic" so named because it is all black and quiet weighty. The compact cast Al enclosure was prepped, etch primed then sprayed Epoxy Enamel black gloss. RCAs on the rear with 6.5mm phone input. Front has volume, on LED phone out and ON/off switch. Quite simple.

There are two external power supplies. A compact SMPS of 24V @1A and a larger linear PS of 20V @ 2A. I woulkd have thought the HP amp to sound better with the linear PS but the SMPS may be the better sounding. Either PS is dead quiet and the amp works extremely well. Though in Class A the amp runs very cool. The small power FETs which do the driving are mounted on small heatsink sections of the cct. brd.

The overall sound is rock solid and weighty. You get the feel the music goes way back into the black background. With my Sennheiser 700 there may be too much detail but with the Technica AIRs there is a better balance. Overall an excellent HP amp.

Posted by retro-thermionic at 6:17 PM No comments: