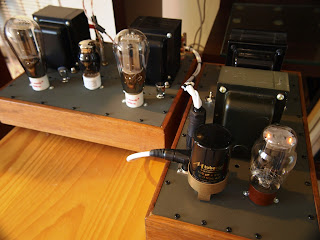 The finished Shiraz-Silver Dragon I built for a member of the Melbourne Audio club sounds as good as it look. It is what you would expect from an amp made from very expensive parts. It has taken almost nine months to gather the parts and assemble the amp. The final finishing touch came in the form of a Golden Dragon 5U4G rectifier tube. A great touch with the tube supporting a large dragon on the front.

This amp has extended, deep and very controlled bass, rich fully fleshed mids and bright crisp highs. The sound stage is very well defined but is not etched. The amp appears tonally balance across the sound spectrum. It does everything right and nothing wrong. It would be the first amp I have made I would never want to see go. Ironically it must.
Posted by retro-thermionic at 11:48 PM No comments: