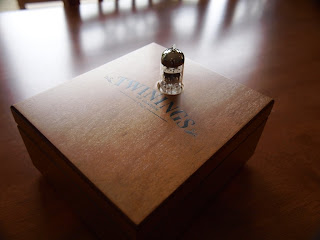 To increase the volume level of the Bread Board amp (Be Bamp), else where on this bLog, a driver stage was built. This is the original cct. used in the Merlot amps with some components upgraded. The is no volume control or input cap and pure silver wire used in the signal path.

The Be Bamp can deliver full volume to the point of clipping. Well short of clipping a high volume level can be obtained with large 91db sensitive 3-way tower speakers. The over-all sound of the system, which also combines a two stage valve preamp, is extremely musical. The sound is very transparent with good bass extension and weight, broad well imaged sound stage and natural tones of voice and instruments.

With the driver stage being remote other driver stages can be matched to the power stage and share the power supply. This provides another level of experimentation and flexibility with the over-all system.
Posted by retro-thermionic at 4:41 PM No comments: 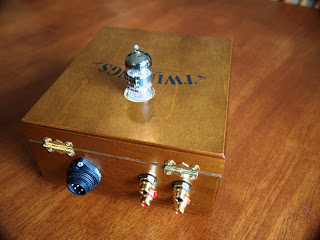 Because the Bread Board amplifier (Be Bamp) performed so well, though at low volumes, a driver stage was built for it. This stage is remote from the rest of the amplifier and is joined to the amp by interconnects. A multi-pin, high grade, plug and socket connect the 400V HT+ and the 6.3V filament voltage to the driver stage. This single stage front-end has been constructed in a Twinings Tea Box to match the two stage valve preamp else where on this bLog. Having the driver stage remote allows the trial of different driver stages while sharing the power stage and the and a common power supply.

The same drive stage as in the Merlot amp was used. This employs a 6N1P Russian tube. Parts of the original schematic were upgraded and Russian military paper, foil and oil caps were used for inter-stage connection. There is no volume pot or input capacitor. Low ESR grade caps were used where possible and pure silver wire used in the signal path. Construction is all component-2-component with no PCB or any other cct. brd. The timber Tea box is bitumanised Al foil lined.
Posted by retro-thermionic at 4:26 PM No comments: 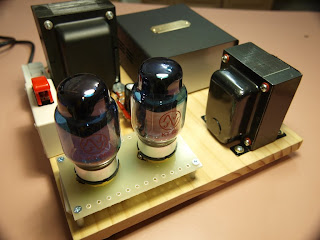 This is the first bread board amp (said Be Bamp) under the retro-thermionic brand so it had to be a different to other BB amps and stand out. Also it was designed to be used with a high gain preamp because, in this model, there is no driver stage. It has been tested with the retro-thermionic Tea Box two stage valve preamplifier. Also all wiring is hidden under the board to give a clean neat look. To further enhance the look the two open OPTs are housed in a metal enclosure. The enclosure doubles as a mounting point for speaker and input terminals, all gold of course.

The driver stage has been removed to reduce the number of stages the music has to travel though before appearing at the speakers. This has resulted in an increase in transparency and detail. In future releases of the Be Bamp a version with the driver stage will be produced.

Though the wiring is hidden there is plenty of components above board. Also the high voltage (400V) rectifier is exposed so electrocution is possible both here and from other components. For a twist the HT standby switch, which must not by operated under one minute of warm-up time, is covered with a red rocket launcher cover. The board is Australian Pine and has been treated with Australian beeswax.

Main components are Hammond (over specified) power transformer and 10H Hammond, high current, choke. Edcor open OPTs are used. The Be Bamp will work with a number of different valves; 6V6GT, and EL34s being just two. A matched pair of JJ Blue Glass KT88s are shown in the image. The amp will produce about 5W if driven fully.

The retro-thermionic Fostex Back Loaded horns were used to evaluate the Be Bamp. Voice and all acoustic instruments display a very dimensional sound with voice sounding crisp and earthy with very controlled sibilance. The amp is absolutely hum, buzz and hiss free and is the quietest amp I have ever built. With a result of the deepest black back ground well know tracks sound new again and display extended fine grain detail.

On request retro-thermionic will provide this amp as a kit with rectifier module and power valve module assembled and tested. Ever part will be provided for the DIYer to assemble.
Posted by retro-thermionic at 12:13 AM No comments: 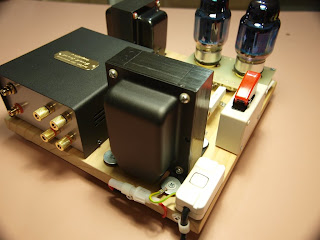 The bread board amp (Be BAmp) is just as attractive from the rear as from the front. The enclosure which houses the OPTs is also used to mount the speaker binding posts and input RCAs which are all gold plated and the RCAs are insulated. The fuse and mains switch are also visible from the rear. Only the power transformer is connected to the mains earth.
Posted by retro-thermionic at 11:53 PM No comments: