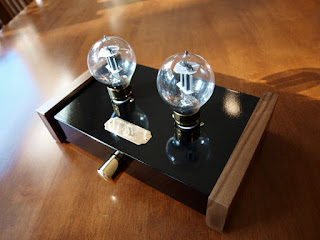 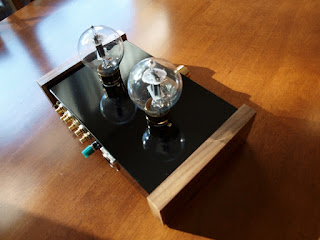 Another preamp based on the expensive limited edition SE Psvane globes. There are two grades of these tubes; Grade "A" and Grade "B". Grace was has the Grade "B" tubes but in this build the even more expensive Grade "A" low noise tubes are used. Grace and Elite share the same schematic (active load - totem pole) and all of the same parts. Even in the first few minutes of pay I could hear the better tubes shining through. The sound is even more clearer and precise than the earlier build.

As in Grace Jensen copper foil, paper in oil caps are used in the output. These caps are rated 630V and are quite large. They also have pure silver leads. There is only three carbon film resistors and the output caps in the signal path. EIZZ 24 step gold contact attenuator once more controls output level and is on the output. WBT silver solder and silver plated fine copper wire is used for hookup. There are two selectable inputs on the rear and an earthing point. The external PS floats.

Twisted Cat5 carries the heavier currents for filament (which is DC) and HT voltage. Russian military PIO 4uf caps sit at the plates to hold HT. These are further snubbed with 0.1uf polies. The Jensen caps are also snubbed with 0.01uf polies to provide a clearer HF path and trap any noise in the caps.

The PS is a little beefier than Grace's but in other respects is very similar. It uses a double Pi filtering configuration and is choked. A total of 400uf (400V caps) ensures a quiet HT. Snubbing caps are placed across the two diode bridges to supply HT and DC filament voltages. The filter\storage caps for both voltages are also snubbed. A 24VAC wall wart supplies the initial power.

Posted by retro-thermionic at 2:08 PM No comments: