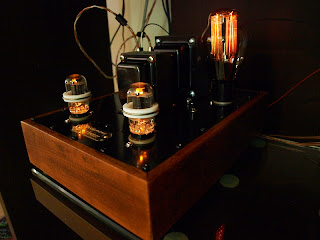 Yet another 6EM7 power amplifier. This time some expensive and different parts were use in construction and a different internal layout was employed. The power transformer and choke are isolated top and bottom by rubber grommets. This ensures no AC vibration reaches the tubes.The initial PS filtering is preceded with a on-board power filter, a 4uf\400V Russian PIO cap and 20H\100mA Hammond choke. The HT is supplied by a Hammond power transformer and a very expensive Sophia Electric mesh plate rectifier tube. The second stage of filtering is 47uf and 100uf electros. with a large limiting resistor ensure the amp is totally free from of hum and noise. All PS caps and cathode bypass caps are snubbed.

This amp sounds better than the last and I think it may be the Sylvania NOS 6EM7 tubes. Russian Teflon caps are used in the inter-stage coupling  and once more large NP caps for the bypass on the power tubes. For the first time I have used Chinese made H&K 15W OPTs, can't fault them. The look of the amp is almost under-stated "sexy" and the sound the same - sexy and natural.
Posted by retro-thermionic at 5:13 PM 4 comments: