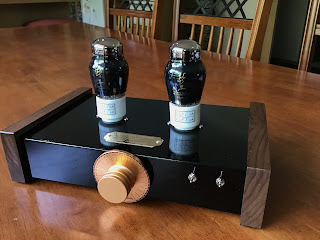 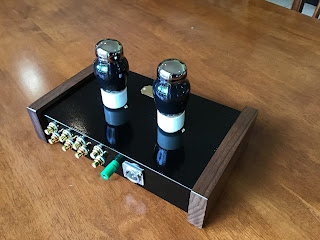 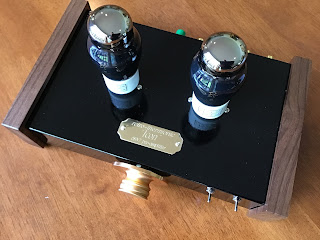 After a very successful build of three similar preamps I wanted to make another using some excellent and less expensive Shuguang CV-181Z (6SN7) 50 Year Treasure tubes. I bought these some years back and it was wrong not to use them. Staying with external DC supplies and using similar construction methods I used in the past "Icon" was born. But this build had to stand out, be different and not just another Grace or Elite (see earlier posts). There are some similarities; same chassis, ceramic sockets and the use of an XLR socket to bring in the two DC voltages to power the preamp.

Where the big changes occurred were mainly in the passives (of course the tubes are very different). Firstly all wiring was with twisted pair or single strand solid core Cat5. I retrained the use of WBT 4% silver solder. The output caps are Mundorf EVO Al and oil types and the resisors are metal film instead of 1W carbon film. A single 4uf PIO cap (snubbed) was used on the HT at the plate instead of one cap for each tube.

I never use a cathode resistor bypass cap (Ck) because I want some local NFB and to supress 2nd harmonic. This time Ck was employed but not with the electrolytic suggested,\ - NP caps. This raised the gain a little but has produced a much fuller and even deeper bass. Also here three inputs instead of two and the selection switch at the front and not the rear. A cheaper stepper attenuator was used rather than the premium version used in Elite. Caps, tubes and stepper were cheaper in this build.

The preamp sounds glorious. It is rich and deep in tone and bass. A big full sound with real depth. Is it better than Elite? That gets down to personal taste, regardless it is an excellent and less expensive build.

Posted by retro-thermionic at 10:01 PM

What about MCPCBs? I thing today, you can easily find a lot of expert Metal Core PCB Manufacturer in the market who can fulfill your custom needs and requirements.

I try to stay away from PCBs and go for true point to point.